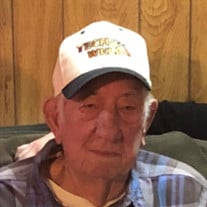 Mr. Ray Goldman 90, of Big Point, MS passed away on July 25,2019 in Pascagoula, MS. Mr. Goldman was born on March 20,1929 in Waynesboro, MS. He enjoyed cooking breakfast for his family and made the “best biscuits” that anyone ever had. He also enjoyed fishing, gardening and he loved to whistle. He served his country with pride and dedication in the United States Army. He was employed with International Paper Company in the shipping and receiving department until his retirement working there for 40 years. He was a loving husband, father, grandfather, great grandfather. He is preceded in death by his parents David and Ethel Goldman, and his brothers William Goldman, John Goldman and Howard Goldman. He is survived by his wife of 62 years, Jeanette Goldman of Big Point, his daughters Sheila (Gary) Turner of Big Point, Sandra (Lloyd) Holston, of Hurley, his son Perry Goldman of Big Point, his brother Roy Goldman of Big Point, and his sister Ruby Lee Kitchens of Ovett, MS. He also leaves behind his grandchildren Toni/Eric, Caleb/Dara, Alaina, Alison, Ryan/Amy, Amber,and his great grandchildren Ethan, Cayden, Elizabeth, Colton, Hunter, Leilyn and Milo. Other relatives and friends. Visitation will be Monday July 29, 2019 from 6:00 pm to 8:00 pm at Holder-Wells Funeral Home at 4007 Main Street Moss Point, MS. The funeral service will be Tuesday July 30,2019 at 10:00 am from the funeral home chapel with Rev. Eric Camp officiating. Burial will follow Serene Memorial Gardens cemetery in Moss Point, MS with military honors. You may sign the online register book and send condolences to the Goldman family at www.holderwellsfuneralhome.com Holder-Wells Funeral Home in Moss Point, MS is in charge of the arrangements.

The family of Mr. Ray Goldman created this Life Tributes page to make it easy to share your memories.

Send flowers to the Goldman family.