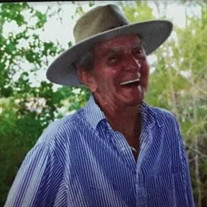 Rolland “Eltroy” Griffin went to be with his Lord and Savior on September 11, 2020, at his home, surrounded by his family. He was born in Lucedale, MS., to Carl and Minnie Walker Griffin. He served in the U.S. Navy where he was a Hospital Corpsman, 3rd Class, stationed in Key West, Florida. He grew up working in a small wooden grocery store, built by his father, in Lucedale, Mississippi. When he was 11, the family moved to Moss Point, Mississippi, where they owned another store front which later became part of the Jitney Jungle grocery store chain. He worked as the manager of the store for many years. He continued to work in the grocery business in produce before owning his own produce stand in Pascagoula, MS. In 1989, he moved to Jacksonville, FL, and later to Greensboro, NC, with his wife, Donna, and their three sons. During his 13 years in NC., he rediscovered his enjoyment of art, and began to paint. In 2008, he and Donna returned to MS. He continued to paint, and especially loved landscape painting. In addition to his parents, Eltroy was preceded in death by his brother, Forrest Griffin, one son, Carl Douglas Griffin, grandson, Jesse Alan Griffin, and Delores Griffin Beasey, the mother of his children, and lifelong friend. Survivors include, his devoted wife of 30 years, Donna Hood Griffin, his children, Jeanne (Jerry) Whistle, Kristi (Tommy) Green, Michelle (Mike) McFerrin, Joe (Donna) Griffin, James (Amy) van Horne, David (Anthony) Aikens, and Todd (Amanda) van Horne. Siblings, Alberta Griffin, Adell (Jimmy) Miles, and Tommy (Joan) Griffin. Grandchildren, Keith (Wendy) Boleware, Kevin (Martie) Boleware, Katie (Wade) Cox, Jennifer Stanley, Adam (Hayley) Trahan, Courtney Sharlow, Jamie (Jason) Cowart, Kelly (Josh) Griffin, Josh (Ashlee) Griffin, Hannah Griffin, Lilliana and Roxanne van Horne, and Sabastian van Horne. 16 great-grandchildren, and 5 great-great grandchildren along with numerous nieces, nephews, and relatives. The family would like to thank Deaconess Hospice for their care during his last days as well as his special angel, Monique McCool Farrington, who God put in the right place at the right times. Graveside service will be held Friday, September 18, 2020 at 10:00 a.m. at Machpelah Cemetery with Rev. Paul Perkins officiating. Serving as pallbearers are, Keith Boleware, Kevin Boleware, Adam Trahan, Josh Griffin, Jason Cowart, and Josh Griffin. Due Covid-19 concerns, face masks and social distancing are required. In lieu of flowers, the family request donations to the Missionary Fund of Grace Independent Baptist Church of Ocean Springs, MS. You may sign the online register book, and send condolences to the Griffin family at our website, www.holderwellsfuneralhome.com Holder-Wells Funeral Home, Moss Point, MS., is in charge of arrangements.

Rolland &#8220;Eltroy&#8221; Griffin went to be with his Lord and Savior on September 11, 2020, at his home, surrounded by his family. He was born in Lucedale, MS., to Carl and Minnie Walker Griffin. He served in the U.S. Navy where he was... View Obituary & Service Information

The family of Rolland Eltroy Griffin created this Life Tributes page to make it easy to share your memories.

Rolland “Eltroy” Griffin went to be with his Lord and Savior...

Send flowers to the Griffin family.