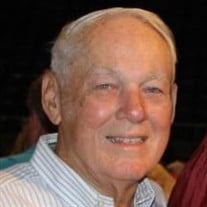 Mr. Roy Edwin Crane 82, of Hurley, passed away peacefully in his home, surrounded by his loving wife and all of his children and grandchildren, on May 15,2021. Roy was born on September 15,1938 in Moss Point, MS. He was a lifelong resident of Jackson County and was an Insurance Agent for over 54 years. In his early years, he also worked at Ingalls Shipbuilding for a short time and was owner of a trucking business. Roy never met a stranger, and he was a friend to everyone. He was a devoted family man and family meant everything to him. He loved his Lord and Savior. He was of the Assembly of God faith. He loved to tell jokes to his family and friends, he enjoyed fishing, floundering at night, throwing a cast net, riding his tractor, four wheeler and golf cart. He loved to entertain everyone by playing his guitar and singing. If someone came to his home they would most likely find him in his barn working or out back tending to his vegetable garden. For 15 years he held the Roy Crane Barn Sing, at his Barn that he built himself. In his younger years he enjoyed boxing. In 1949 he was a member of the City of Moss Point’s fast pitch championship team. He played for the Boilermakers Local # 693 softball team in the Pascagoula City League starting in 1956. He started playing in the Jackson County Church Softball League at age 36 and played until retiring at age 68. Overall playing ball for 57 years. He was a co-founder of the Jackson County Men’s Church Softball League. He was elected president of the Jackson County Men’s Church Softball League in 1976 and continued in that role for 21 years. He played on and coached several ASA and Mississippi Assembly of God State Softball Championship teams. He was the team coach and pitcher on the 1992 USSSA Church softball team finishing 4th in the World Tournament and at year’s end ranked #14 in the nation. He was the host and tournament director for the Firecracker Invitational, the longest running annual men’s softball tournament in the state of Mississippi, held yearly the weekend before the 4th of July. This year will be the 40th Firecracker Invitational, with proceeds always going to local charitable causes or the complex building fund. In 1999, recognizing the growth at Lum Cumbest Park in East Central, and the need for more space for the youth sports and their safety, drew the plans for a 4 field complex and fields and coordinated with the Jackson County Board of Supervisors to lease land for a new adult softball complex. He organized with local bulldozer and trackhoe owners to clear the 20 acres needed for a 4 field complex. The complex was completed and in his honor the Jackson County Board of Supervisors named it after him, the Roy Crane Softball Complex, located in Hurley. After retiring, he was able to enjoy watching his kids and grandkids play on the fields he was instrumental in developing. Roy is preceded in death by his parents, Ed and Ada Crane, his sister Lou Adams and his brother L.D. Crane. He is survived by his wife and the love of his life for 63 years Helen Crane, his children Curtis (Dana) Crane, Terry (Rhonda) Crane, Brian (Sherri) Crane and Rena (Eddie) Danley. His grandchildren Calla (Matt) Bradshaw, Tyler (Brandie) Crane, Logan (Halie) Crane, Gavin (Kayla) Crane, Skyler (Kara) Crane, Colby (Victoria) Crane, Conner Crane, Blake Danley, and Colin Danley. His great grandchildren Cray, Brix, Caden, Ryleigh, Julianne, Braven, Lauren, Beckham, Barrett, Myles, one boy on the way and a host of cousins, nieces, nephews and special friends. Visitation will be Tuesday May 18, 2021 from 10:30 am to 12:30 pm at Three Rivers Assembly of God Church 15910 Hwy 63 Moss Point, MS 39562. The funeral service will begin at 12:30 pm from the church sanctuary with Rev. Brian Crane, Rev. Gene Emswiler and Rev. Rodney Coleman officiating. Burial will follow at Machpelah Cemetery in Pascagoula.His grandsons will serve as pallbearers. The family would like to say a special thanks to Margie Carter with Encompass Home Health and Hospice and also to JoAnn Vice for their special care. In lieu of flowers the family request that donation to be made to the Gideons International. You may sign the online register book and send condolences to the Crane family at www.holderwellsfuneralhome.com Holder-Wells Funeral Home 4007 Main Street Moss Point, Mississippi 39563 is in charge of the arrangements.

Mr. Roy Edwin Crane 82, of Hurley, passed away peacefully in his home, surrounded by his loving wife and all of his children and grandchildren, on May 15,2021. Roy was born on September 15,1938 in Moss Point, MS. He was a lifelong resident... View Obituary & Service Information

The family of Mr. Roy Edwin Crane created this Life Tributes page to make it easy to share your memories.

Mr. Roy Edwin Crane 82, of Hurley, passed away peacefully in...

Send flowers to the Crane family.