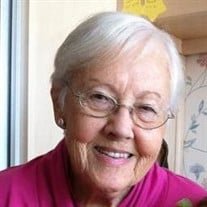 Ruth Jean Horn was born on July 13, 1920 in New York City to traveling vaudeville entertainers, Robert and Beryl Raymond. Ruth was one of eight siblings, and she was raised by her paternal grandmother and aunt in Mamaroneck, NY. She graduated from Mamaroneck High School in 1938 and attended Hunter College. She enlisted in the U.S. Navy’s newly formed WAVES (Women Accepted for Volunteer Emergency Service) and was sent to Long Beach, CA where she met Karl Barton Horn from Mississippi. Ruth was impressed with Karl, a navy epidemiologist. He grew healthy vegetables behind his medical lab, and cooked them extremely well, with rabbit, in the lab’s autoclave! They were married September 23, 1944. After their Navy discharge in 1945 they moved to Mississippi where Ruth began blending her Yankee toughness with the easygoing style of the rural south. When Karl began medical school, it took them to Oxford, MS where Patti was born in 1947 and later to New Orleans, LA where Raymond was born in 1949. Karl established his medical practice in Port Gibson, MS in 1950, where Ruth became involved in local service activities. In 1955 the family moved to Moss Point, MS, where Ruth began a long life in community involvement, which included the Medical Auxiliary, Library Board, Community Concerts, Fortnightly Club, and Moss Point Presbyterian Church, where she taught Sunday school and served as treasurer of Women in the Church. Ruth was active in the Pascagoula and Moss Point Friends of the Library. The Library Board was always a major focus in her activities, and she held various positions during her long association. She passed on her love of books to her great grandchildren—Emma, Sarah, and Charlie—who can always be found reading a book or requesting a trip to the library. Some of Ruth’s other activities were the Moss Point Garden Club, MPAC (Moss Point Active Citizens), River Jamboree, and the Mississippi Gulf Coast Traditional Rug Hooking Guild, where she was beloved as “the oldest hooker in Jackson County.” In 1998, she and Karl were the recipients of the Community Lifetime Achievement Award for their dedication and service to the community. Ruth was a member and supporter of the Pascagoula River Audubon Center. She was also a cancer survivor, which led to her counsel of other cancer victims as well as participation with Karl in a local hospice program. Ruth’s only fear was what she called “idle hands,” which she never knew. She produced numerous beautiful items through her knitting, needlepoint, cross stitch, petit point, and hooking. And if you really knew her, you also know how much she loved her family, dark chocolate, red wine, and sarcasm. “Sweet Ruth” always said, “you should worry if I’m not sarcastic with you.” She was the family tour director and will forever be known for keeping everyone on track, burning Karl’s bread, and forgetting Christmas gifts she hid in her underwear drawer. She will be deeply missed by her family, friends, and community. Ruth had an amazing 99 years of life, 75 of those with the love of her life, Karl Horn. She is survived by her husband, Dr. Karl B. Horn; children, Patti Horn Weiss (Herman Charles Weiss III) & Raymond Horn (Patrick Millegan); grandchildren, Jennifer (Weiss) Wood (Jeremy Wood) & Lindsay (Weiss) Manco (Matt Manco); and great grandchildren, Emma Hruska, Sarah Hruska, & Charlie Manco. The family is deeply grateful for the care Ruth received from all of the caregivers from Home Instead Senior Care and from Hospice of Light angels, Michael Gray and Johnese Cochran. A memorial service will be planned at a later date. Donations in her memory can be made to the Moss Point Friends of the Library, Pascagoula River Audubon Center, and the Moss Point Presbyterian Church. Holder-Wells Funeral Home in Moss Point in in charge of arrangements.

Ruth Jean Horn was born on July 13, 1920 in New York City to traveling vaudeville entertainers, Robert and Beryl Raymond. Ruth was one of eight siblings, and she was raised by her paternal grandmother and aunt in Mamaroneck, NY. She graduated... View Obituary & Service Information

The family of Ruth Jean Horn created this Life Tributes page to make it easy to share your memories.

Send flowers to the Horn family.