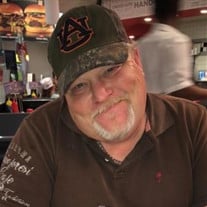 Shannon Lee Barnes of Helena, MS moved on to his eternal resting place on February 17, 2020 at the age of 52. He was born on May 1, 1967 and was preceded in death by his mother, Helen Priscilla Breland and grandparents Billy and Kathleen Breland and Thomas and Katherine Barnes. He is survived by his wife, Deanna Blades Barnes, of 20 years; his father, Milford Lee (Jeannie) Barnes Sr.; his 5 children, Nyka Barnes, Caitlin (Heath Bond) Barnes, Timothy Blades, Justyce Blades, and Brianna (Kangel) Alvarado ; his 8 grandchildren, Bethany Bond, Brennon Barnes, Carly Bond, Ayden Bond, Bryleigh Bond, Annalisia Blades, Grayson Jordan, Karson Blades; and numerous aunts, uncles, nieces, nephews, cousins and friends that he considered family. Shannon graduated from Pascagoula High School in 1985. He loved football and softball; he was a huge New Orleans Saints fan and a die-hard Auburn University fan (or anyone who was playing against Alabama). He enjoyed coaching his children and their friends over the years and watching his grandchildren play ball as well. Practicing in the yard was routine for them at all times. He enjoyed being on the river, whether it be riding in the boat or pulling anyone on tubes just to get the enjoyment of KNOWING he would be able to throw them off, camping on sandbars under nothing but blue tarps, or just relaxing with a fishing pole in his hand. Shannon was an avid whistler and had a whistling tune like no other and you knew to look for him whenever you heard it no matter if it was out in the yard or in the local grocery store. He had a singing voice of angels and the dance moves like a chicken. He didn’t care where he was, what time it was, or who was around, he would do anything to make them laugh or smile especially if they were feeling down. He was very loud and very proud, fun-loving, and caring. His wife, children, and grandchildren were everything to him and he did what he could to be sure they each had every thing they needed and wanted. Arrangements will be officiated by Brother Bill Palmer of First Baptist Church of Helena and begin with visitation from 1:00 p.m. to 3:00 p.m. for family and friends with the funeral immediately following at Holder-Wells Funeral Home, 4007 Main Street, Moss Point, MS 39563, February 23, 2020. A graveside service will follow at Serene Memorial Gardens, 12800 Highway 613, Moss Point, MS 39563. Pallbearers: Derek Blades, Daniel Blades, Timothy Blades, Daniel Thompson, Jake Jordan, Timmy Caldwell, DJ McQueen, Terry Goff, Al Lewis III, and Mitchell Miller Honorary Pallbearers: Brennon Barnes, Ayden Bond, Dreydan Jordan and Grayson Jordan You may sign the online register book and send condolences to the Barnes family at www.holderwellsfuneralhome.com Holder-Wells Funeral Home in Moss Point, MS is in charge of the arrangements.

Shannon Lee Barnes of Helena, MS moved on to his eternal resting place on February 17, 2020 at the age of 52. He was born on May 1, 1967 and was preceded in death by his mother, Helen Priscilla Breland and grandparents Billy and Kathleen Breland... View Obituary & Service Information

The family of Shannon Barnes created this Life Tributes page to make it easy to share your memories.

Shannon Lee Barnes of Helena, MS moved on to his eternal resting...

Send flowers to the Barnes family.