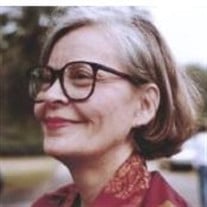 Shirley Faye Atwood Cumbest, 86, died peacefully in Pascagoula, MS, on September 4, 2021, surrounded with family and friends. Shirley was preceded in death by her parents, George Lafayette Atwood and Mary Frances Lewis Atwood; brothers Lewis Edward Atwood and George Robert Atwood; and her husband, Arvis Vertis (Sid) Cumbest. Survivors include her children: Susan Frances Cumbest McCormick (David), Arvis Scott Cumbest (Lynn), Sandra Jean Cumbest (Andy Knapp), Stephen Atwood Cumbest, and Sydney Faye Cumbest. Grandchildren include Sarah Kathryn Hickman (Craig Ricci), Caroline Louise Stevens (James), Hilary Roberts Cumbest, Madison Rose Cumbest, Cole Atwood,Cumbest and great grandchild, William McCormick Hickman. She is also survived by her two brothers, Richard Collins Atwood (Martha) and Charles Lafayette Atwood (David Dedmon). Shirley was born in Raymond, MS, on May 27, 1935, and lived in Pascagoula for most of her life. She often enjoyed recalling pleasant memories of visiting relatives in Hinds County as a young child. After residing in New Orleans during World War II, her family relocated to Pascagoula. She attended Pascagoula High School where she was valedictorian in 1953. Shirley worked as an administrative assistant at Ingalls Shipbuilding, but later became a full-time homemaker. Committed to her family, Shirley contributed tremendously while her husband completed his studies in law. Exceptionally gifted in cooking, she relished entertaining family and friends and teaching cooking classes in her home. Shirley was a woman filled with ambition and a desire for self-improvement. Her admiration of education inspired her to attend Springhill University, the University of Southern Mississippi, and the University of Georgia where she received a Doctorate of Clinical Psychology. For several years Shirley was dedicated to serving as a member of the Pascagoula Library Board. She enjoyed extensive traveling, playing bridge, gardening in her yard, and her book club, The Glories. She attended Eastlawn United Methodist Church with her family. Many thanks and much gratitude are extended to Renee Breland, her longtime, faithful friend and assistant. The family wishes to acknowledge Casey Vaughan and Rachel Blades and thank them for continued dedication and service to the Cumbest family. A Celebration of Life will be held for immediate family and close friends at a later date.

The family of Mrs. Shirley Faye Atwood Cumbest created this Life Tributes page to make it easy to share your memories.

Send flowers to the Cumbest family.