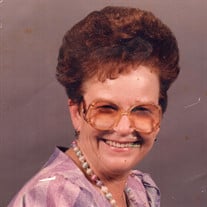 With great sadness we announce the passing of Shirley Hearndon Scarbrough She left peacefully and entered the gates of heaven January 30, 2019 A lifelong resident of Wade/Hurley, Shirley married Phillip “Tubby” Scarbrough in 1955. She was a homemaker until the mid 60’s when the failing health of her husband required her to take a job outside of the home. She began working at the Jackson County “old folks” Home in Hurley, providing care and assistance to the elderly residents. After becoming a widow in 1967 she was prompted to become a welder at Ingalls shipyard, taking on a trade that at that time was primarily done by men, to provide for her 4 children. Her internal strength and devotion to her children allowed to evolve into this new roll in life with enthusiasm and dedication. She remained at Ingalls for 10 years, before she returned to the County Home to do what she did so naturally, caring for others, until retirement. Shirley was blessed with the gifts of Hospitality, Understanding, Fortitude, and Knowledge. She had a bounty of love in her heart, she made this obvious in her devotion to her family and to all whose lives she touched. She is survived by her daughters, Vera Neese, and Mary and Juan Landron and her daughter-in-Law Connie Stovall Her grandchildren, Tomi Scarbrough, Jason Mills, Shane Scarbrough, Chasity Callegan, Matthew Stodola, Christa Graham, Jared Stodola, Torye Johnson, Jacob Neese, Jay Brooks. Her great grandchildren Shephard Schumaker, Kara Schumaker, DaLayna Goldman, James Mills, Wade Mills, Autumn Beck, Karma Stodola, Samantha Stodola, Tyler Goff, Alana Scarbrough, Landon Jones, Angelina Stodola, Michael Stodola. Her great great grandchildren, Nic Goldman, Peighton Goff, Jordan Scarbrough, Coltyn Scarbrough, Cadeyn Scarbrough and Caseyn Scarbrough. Her sister Ina Mason, her brothers Carl, Leon, and her twin Merley Hearndon. She also leaves behind a multitude nieces, nephews, cousins, in-laws and friends to continue celebrating her life with shared memories and stories of the life she lived. She is predeceased by: Parents Sammie and Myrtle Hearndon. Children, Phillip and Bobbie Gail Scarbrough. great grandchildren, Justice Graham and Christian Mills. Sister, Ollie Mae Dees. Brothers, Van, Pug, James, Bertis, Bunch, Buck, W.D. Hearndon, and countless other loved ones. Let us Rejoice! After 51 years she is with the love of her life again. Phillip H. Scarbrough 1930-1967 + Shirley Hearndon Scarbrough 1935-2019 Visitation will be Thursday, Feb. 7, 2019 from 5- 7 p.m. at Holder-Wells Funeral Home, 4007 Main St., Moss Point, MS. Funeral Service will be held Friday, Feb. 8, 2019 at 11:00 a.m. at Holder-Wells Funeral Home Chapel with Rev. Rodney Coleman officiating. Burial will be at Johnson's Cemetery. Her Grandchildren will be serving as pallbearers, and great grandchildren will be serving as honorary pallbearers. A SPECIAL THANKS TO Greene Rural Health Care Center for the attentive care they provided to this special lady.

With great sadness we announce the passing of Shirley Hearndon Scarbrough She left peacefully and entered the gates of heaven January 30, 2019 A lifelong resident of Wade/Hurley, Shirley married Phillip &#8220;Tubby&#8221; Scarbrough in 1955.... View Obituary & Service Information

The family of Shirley Hearndon Scarbrough created this Life Tributes page to make it easy to share your memories.

With great sadness we announce the passing of Shirley Hearndon...

Send flowers to the Scarbrough family.