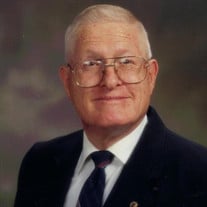 Sterling “Kay” Carlow passed into heaven on Saturday, July 31, 2021. He was born in Monroe, Utah on July 9, 1932. After graduating from High School in Santa Ana, California, Kay earned a B.S. Degree in Naval Science from the University of Utah in Salt Lake City. He served our country as an Officer in the U.S. Marine Corp from 1955-1960. He first saw the love of his life, Marjorie Jo Metcalf, at an NCO Club Costume Party. Marjorie was dressed as Daisy Mae. Kay said to himself, “That’s the cutest thing I’ve ever seen!” The two were married on March 17, 1960. After Kay was discharged from the Marines, the couple moved to Fort Worth, Texas, where Kay worked for Montgomery Ward and General Dynamics. Then the young family, including daughters Linda Fay and Barbara Ann, moved to Pascagoula, Mississippi, for Kay to serve Ingalls Shipbuilding as a Financial Analyst and then as Director of the Budget Department. Kay had earned his Master’s Degree in Business Administration from the University of Southern Mississippi. The couple became very active in Eastlawn United Methodist Church where Kay taught Sunday School. He was very active in many committees at Eastlawn, including the Administrative Board and the United Methodist Men’s Club, as well as attending the District Conferences for several years. Kay was a member of the Pascagoula Civitan Club and served twice as Governor of the Mississippi Magnolia District of Civitan as well as representing the club at district and international conventions. Kay was a member of several Toastmasters Clubs on the coast and served as District Governor of District 29 of Toastmasters International, promoting public speaking skills. Kay was a loving husband and father. He loved his God, his Church, his Country, and his family. He was never selfish in his endeavors or the way he spent his time. Rather, he spent his time serving others. He supported the Eastlawn United Methodist Church in their tape ministry to shut-ins for many years, tirelessly using the church’s cassette tape copy machine to make many tapes after each Sunday Service, one tape at a time. He would lovingly visit each person unable to attend church in person, giving them a tape of that week’s service. He kept what we know today as “social distancing” much less painful for our sick long before viewing services online was possible. He once found out about a disabled college student who was unable to drive to get to her classes. He personally picked her up each day and took her to class in her wheelchair so she could attend college that year. Kay volunteered for many years in the Singing River Hospital Auxiliary, escorting patients where they were to go for various tests and serving coffee in the cancer treatment areas. He served as President of the Auxiliary in 2009-2010. When Kay moved to a smaller apartment at his loving Seashore Highlands Assisted Living Community, he decorated one wall with a large portrait of Marjorie and smaller portraits of his daughters Linda and Barbara. He proudly stated, “I’ve got my girls right there!” He was given the book by William Bennett entitled “The Moral Compass” because he was always his family’s moral compass. He always set the living example of how we should live our lives in loving God, being fair and just and loving toward others, and serving whenever we are able. He taught his daughters these valuable life lessons and even encouraged cordial debates with them to hone their confidence in their own self-expression. Kay demonstrated so much love toward Marjorie in her later years by pushing her wheelchair everywhere she wanted to go – which was to church and to go shopping! He helped care for her at Seashore Highlands Assisted Living and then visited her daily at Greenbriar Nursing Center. He took Marjorie to the library at Greenbriar where Marge would get 7 more books, drink coffee with Kay, and play cards. Kay and Marge were greatly loved by the staff and residents at both Seashore Highlands and Greenbriar Nursing Center. Kay loved the Bible Studies at Seashore Highlands, playing bridge there and at the bridge tournaments he organized with Woolmarket Senior Citizens’ Center, but mostly he loved the staff and residents at both Seashore Highlands and at Greenbriar Nursing Center. Preceding Sterling Kay Carlow in death are his wife, Marjorie Jo Metcalf Carlow, his parents, Don W. Carlow and Myrtle Foreman Carlow of Price, Utah, stepmother Adele Bonza Carlow, siblings Don Farrell Carlow, Gwen Bonza, Earlene Wilson, and grand-daughter Elena Claire Lacoste. Elena loved just sitting in her Papa’s pick-up truck with him, talking and eating peppermint candies. Oh, what a reunion in heaven they are having now!! Kay Carlow is survived by his daughters Linda Carlow (Anita) and Barbara Lacoste (Jeff), granddaughter Evita Rae Lacoste, his sister Ada “Jean” O’Berg, brother Earl Carlow, sister Joan Johnson (Fred), brother-in-law Jim Wilson and many nieces, nephews, and friends. A celebration of life will be held at Holder Wells Funeral Home Chapel at 2 PM on Friday, August 6, 2021. Friends and family may come for visitation from 1-2 PM. In lieu of flowers, the family prefers donations in his memory to Eastlawn United Methodist Church, 2502 Ingalls Ave., Pascagoula, MS 39567. You may sign the online register book and send condolences to the Carlow family by visiting our website at www.holderwellsfuneralhome.com Holder-Wells Funeral Home, 4007 Main St., Moss Point, MS is in charge of the arrangements.

Sterling &#8220;Kay&#8221; Carlow passed into heaven on Saturday, July 31, 2021. He was born in Monroe, Utah on July 9, 1932. After graduating from High School in Santa Ana, California, Kay earned a B.S. Degree in Naval Science from the University... View Obituary & Service Information

The family of Sterling K. Carlow created this Life Tributes page to make it easy to share your memories.

Send flowers to the Carlow family.