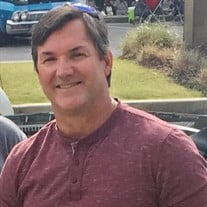 Steven Boyd Beckham, 51 of Hattiesburg, Mississippi, formerly of Grand Bay, Alabama, passed from this life on Thursday, December 5, 2019 in Mendenhall, Mississippi. He was a graduate of Mobile County High School and the University of Alabama in Tuscaloosa. Steve was a Senior Control Analyst with Kinder Morgan. He was a "car guy" from day one, enjoyed drag racing his '68 Camaro and cruising in his '67 Camaro. Steve was a lifelong Alabama Crimson Tide fan and enjoyed spending time with family and friends, but most of all, his greatest passion and accomplishment in life was being the most loving, dedicated and awesome Dad to Jack and Sam. Steve was preceded in death by his mother, Fayla Beckham; grandparents, Herman and Juanita Beckham, Albert and Faye Simmons; and a beloved infant daughter, Madelin Beckham. Survivors include his two children, Jack Beckham and Sam Beckham; his Father, Boyd and Brenda Beckham; loving sister, Suzanne Beckham; his sweetheart and "little Aubie girl", Natalie Eubanks McDonald and her children, Claire and Avery, the Eubanks family, and many uncles, aunts, cousins, other relatives and many, many friends. Visitation will be held on Monday, December 9, 2019 from 12:00 until 2:00pm at Holder-Wells Funeral Home in Moss Point. Funeral services will begin at 2:00pm from the funeral home chapel with Dr. Royce Dubose and Mr. Edwin Williams officiating. Serving as pallbearers will be Brooks Heirs, Steve Goodson, David Cooper, Robert Switzer, Nolan Brannan, Richard Brooks, Stephen Beaupre & Chris Hampton Interment will follow at Serene Memorial Gardens 12800 Hwy 613 Moss Point, Mississippi 39562. Friends and family may share condolences at www.holderwellsfuneralhome.com. Arrangements by Holder-Wells Funeral Home 4007 Main Street, Moss Point, Mississippi 39563.

Steven Boyd Beckham, 51 of Hattiesburg, Mississippi, formerly of Grand Bay, Alabama, passed from this life on Thursday, December 5, 2019 in Mendenhall, Mississippi. He was a graduate of Mobile County High School and the University of Alabama... View Obituary & Service Information

The family of Steven Boyd Beckham created this Life Tributes page to make it easy to share your memories.

Send flowers to the Beckham family.