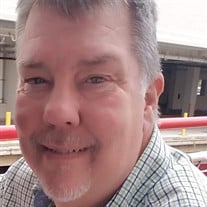 Mr. Steven V. "Steve" Henderson, 50 of Escatawpa, Mississippi, passed from this life on Sunday, August 4, 2019. He was born December 31, 1968 in Pascagoula, Mississippi. Steve was the most selfless man and would give you everything he had if you needed it. He loved big and fought hard. Steve was loyal to his family and friends and willing to give a helping hand at any time. He had a big heart when it came to kids and animals. Steve was a commercial truck driver and former Moss Point Policeman. He loved traveling with his wife, she was his heart and soul. He loved going to car races, telling jokes, he was a joker and he would jump out of the shadows and scare you for laughs. Steve was the type of friend that if you called on him in need to help you, he would come running and go out of his way to help. He was a listener instead of a talker. His dream of his life was to retire and travel with his wife Vonnie, to show her all of the places that he had been. Steve was preceded in death by his parents, John and Tommy Henderson. He is survived by his loving and devoted wife Devonna "Vonnie" Henderson of Escatawpa, his daughter, Brooke Rutledge / Nate Case of Long Beach, his granddaughter Holly Case of Long Beach, brother, Mark (Becky) Henderson of Vancleave, and his niece Leanne Henderson / Jeremiah Caster of New Port Richey, Florida. He also leaves behind many nieces, nephews and other relatives and many friends. Visitation for Steve will be Sunday, August 11, 2019 from 2:00pm until 4:00pm at Holder-Wells Funeral Home, 4007 Main Street, Moss Point, Mississippi 39563. A celebration of life service in Steve's honor will begin at 4:00pm from the funeral home chapel. With Steve's love for animals, the family wishes in lieu of donations or monetary, food or supplies to be made to the Jackson County Animal Shelter 4400 Audubon Lane Gautier, Mississippi 39553. Friends and family may share condolences and sign an online register at www.holderwellsfuneralhome.com. Arrangements by Holder-Wells Funeral Home 4007 Main Street, Moss Point, Mississippi 39563.

Mr. Steven V. "Steve" Henderson, 50 of Escatawpa, Mississippi, passed from this life on Sunday, August 4, 2019. He was born December 31, 1968 in Pascagoula, Mississippi. Steve was the most selfless man and would give you everything he had if... View Obituary & Service Information

The family of Mr. Steven V. "Steven" Henderson created this Life Tributes page to make it easy to share your memories.

Send flowers to the Henderson family.