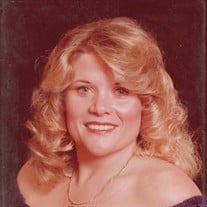 Susan Elizabeth Jay, age 71, passed away at her residence on Monday, September 6, 2021. She was preceded in death by her father, Carl Lawrence Pringle, brother, William Carl Pringle. Susan is survived by her husband, Robbie Jay of Moss Point,... View Obituary & Service Information

The family of Susan Elizabeth Jay created this Life Tributes page to make it easy to share your memories.

Susan Elizabeth Jay, age 71, passed away at her residence on...

Send flowers to the Jay family.