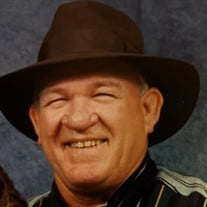 Teddy (Poppy) Davis 73, from Pascagoula, MS, died Friday, January 31, at Singing River Hospital under Hospice care. He was an active member of Woodlawn Baptist Church in Pascagoula. He was a United States Army Veteran serving during the Vietnam... View Obituary & Service Information

The family of Teddy (Poppy) Davis created this Life Tributes page to make it easy to share your memories.

Send flowers to the Davis family.