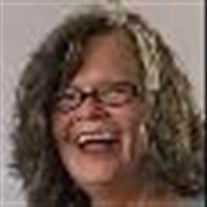 Teena Grubbs, 58 of Moss Point, Mississippi, passed away on July 3, 2019 in Houston, Texas. Teena enjoyed to travel which included two mission trips to Honduras.She also had a love for children and spent many years advocating and caring for... View Obituary & Service Information

The family of Mrs. Teena Necaise Grubbs created this Life Tributes page to make it easy to share your memories.

Teena Grubbs, 58 of Moss Point, Mississippi, passed away on July...

Send flowers to the Grubbs family.