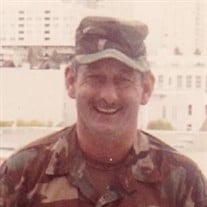 Terry “ Wayne” Cameron – June 18, 1948 – April 8, 2021 of Hurley, MS gained his eternal glory and claimed his reward promised to those who believe. He joins those loved ones who went on before him and now rejoices in the presence of our Lord and Savior. He was born to Harry Cameron and Irene Brannan Cameron in Greene County, MS and grew up in the Brushy Creek Community. He was preceded in death by his parents, his wife, the love of his life, Sandra Berry Cameron and brothers, Joe Cameron and Daniel (Ruth) Cameron. Wayne leaves to cherish his memory his children, Eric Cameron of Nevada, Kimberly Gray of Pascagoula, MS, Lana (Chris) Smith of Harleston, MS, Karen Roberts of Amarillo, Texas, Amber (Eric) Thompson of, Gautier, MS and Shelley Seek, Florida. Sister; Inez Dunnam, Brothers; Grant Cameron, Gary (Margie) Cameron, Lewis David (Wanda) Cameron, John Paul Cameron, Carole Reid and 8 grandchildren and nieces nephews and friends. Wayne proudly served his country in the US Army during the Vietnam War, was stationed in Korea and also served in the US Army Reserves as Sergeant First Class. During his service in the Army Reserves he was called to serve in Operation Desert Shield/Desert Storm in San Francisco, Ca. He was released from Service July 1991. He received the National Defense Service Medal, Armed Forces Expeditionary Medal, Army Service Ribbon, Overseas Service Ribbon, and the M16 Rifle (Sharpshooter) Army Lapel Button. The family wishes to thank Hospice of Light and Mollie Reeves for her care, love and compassion shown to Wayne during his illness. The tender care she provided is greatly appreciated. We would also like to thank his neighbor Terri Gary for always looking out for him. When she was thanked for all she had done her response was “He was my neighbor, that’s what you’re supposed to do.” Terri we appreciate all you did to help us take care of Wayne. The Memorial Service will be held at the Biloxi Nation Cemetery Pavilion, 400 Veterans Avenue, Biloxi, MS 39531 on Friday April 16th at 1:30 p.m. Due to COVID-19 attendance may be limited. In lieu of flowers you may send denotations in Wayne’s Memory to New Horizon Ministries 10501 Highway 63, Moss Point, MS 39562.

The family of Terry Wayne Cameron created this Life Tributes page to make it easy to share your memories.

Send flowers to the Cameron family.