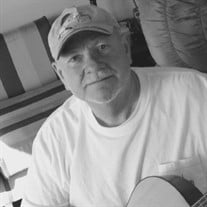 Thomas “Tommy” Allen Crawford, age 73 of Moss Point, MS, passed away peacefully on October 23, 2021, surrounded by family and friends. Tommy was born June 21, 1948, in Pascagoula, MS to William Allen and Rose Mary Spinks Crawford. He was preceded in death by his parents and brothers Billy, Donald and Kenny. His survivors include his wife of 51 years, Patricia Rainey Crawford, and daughters Allyson (Matthew) Perez and Adrianne (Joshua) Rhoads; and sisters Ivy Gardner, Elizabeth Crawford and Ruth Anderson; and grandchildren England Rose Crawford, Luke Thomas Perez, Rowan Thomas Rhoads, Jack Henry Perez and Bayla Perez. Tommy proudly served tin the U.S. Army from 1967-1969. His Army service included a tour in Vietnam and concluded with an Honorable Discharge after achieving the rank of Sergeant. Tommy graduated from William Carey College with a Bachelor of Science degree and was employed with Singing River Health System for 38 years as an X-Ray technician before retiring as the Director of Radiology in 2005. Tommy was affectionately known as “Mr. X-RAY” throughout his years for his satirical articles and songs he wrote in the hospital’s newsletter “Vital Signs.” Along with being a member of First Baptist Church SBC Moss Point, Tommy was an avid fisherman and a long-time member of the YMBC. He was also locally known as “the voice of the Krewe of DO DAH” marching club. Tommy was an extremely talented and loved musician and songwriter. He began playing gigs at the age of 11 and frequenting pubs as local talent in England by age 16. Never knowing how to read music, he could play any instrument with ease. He was a member ASCAP and a member of the Mississippi Songwriter’s Alliance. One of Tommy’s greatest influences was Hall of Famer Mr. Ray Stevens and Tommy lived to see a dream come true when Mr. Stevens recorded his song, Claws (A Cat’s Letter to Santa) co-written with his friend Taylor Craven. Tommy will be deeply missed by his family and friends but in his own words, “When they lay me down to sleep, I know I’ll always be complete cause I’ll still be loving you.” Thomas Allen Crawford. Visitation for Tommy will be Thursday October 28,2021 from 10:00 am to 11:30 am at the First Baptist Church of Moss Point 4807 Main Street Moss Point, Mississippi 39563. The funeral service will begin at 11:30 am from the church sanctuary with Rev. Michael Perry officiating. Pallbearers will be Terry Bounds, George Cumbest, Wayne Lennep, Derik Anderson, Daniel Taylor and Ty Crawford. Honorary pallbearer will be Joe Brown. A private graveside service will be Friday October 29,2021 at Soules Chapel United Methodist Church Cemetery in Moselle, Mississippi with military honors conducted by the United States Army. In lieu of flowers donations may be made to Mississippi Songwriters Festival at 18524 George Cumbest Rd. Moss Point, MS 39562 or PayPal @MSsongwriters. You may view the online register book and send condolences to the Crawford family at www.holderwellsfuneralhome.com Holder-Wells Funeral Home 4007 Main Street Moss Point, Mississippi 39563 is in charge of the arrangements.

The family of Mr. Thomas Allen “Tommy “ Crawford created this Life Tributes page to make it easy to share your memories.

Send flowers to the Crawford family.