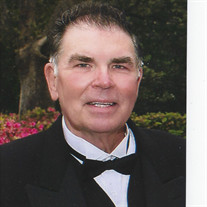 Thomas Lincoln Hammons age 83, a resident of Gautier, Mississippi passed from his earthly home to his heavenly home on September 9, 2019 in We Care Hospice surrounded by family. He was born November 17, 1935, the first of six children to Thomas and Virgie Mae Royals Hammons in Pineville, Mississippi. He graduated as salutatorian from Pineville High School in 1953. Lincoln married his sweetheart, Dorothy Helen Rogers, in 1953, and moved to Pascagoula, MS for work. In 1957, they moved to Moss Point, MS, where they raised 3 sons and 1 daughter. In 1986, he and Dorothy moved to Gautier, MS where he lived the rest of his life. Growing up he worked on his daddy’s farm and cut and hauled logs and pulpwood. He was a member of the 4-H Club and was once selected to serve as a poultry judge at the 4-H Club state fair held at Mississippi State University. He was also a “Grit” paper carrier in the Pineville community. His first job was working as a “roughneck” with his uncles in the oil fields in LA, MS, and AL. In between jobs, he worked at a canning plant in Laurel, MS. He later worked as a lineman for South Eastern Construction Company in Pascagoula, MS, and for a short period of time worked with his brother-in-law for the Color Bright Products company in Wisconsin. Upon returning to MS, he worked at the International Paper (IP) company’s Moss Point mill before going to work at Ingalls Shipbuilding in the late 1950’s. He began his career at Ingalls as an electrician and worked there for an accumulative total of 40+ years. He took a break from his work at Ingalls for a couple of years to work as an electrician for Brown and Root (B&R) Construction Company on a large capital project at Chevron Pascagoula refinery. Afterwards he returned to work at Ingalls as an electrical engineering designer level IV until he retired in 1998. During his early career at Ingalls he completed his apprenticeship program and graduated as the top apprentice in his class. Subsequently he served for many years as an instructor and chair of the Ingalls’ electrical apprenticeship training program which was conducted at the MS Gulf Coast Community College Jackson County campus. He was a Scout Master for the Boys Scouts of America when his sons were in the Cub Scouts. He was a jack of all trades and could build and repair almost anything. He enjoyed carpentry and electrical work and taught his children and son-in-law the trades. He loved his family and received much pleasure from working with them and teaching them. He enjoyed listening to music especially gospel and country while he worked. He loved the outdoors including doing a little gardening. He enjoyed hunting and fishing but especially fishing which he did as often as he could. He shared his love of the outdoors with his children teaching them to hunt and fish. He especially enjoyed feeding the variety of wild animals around his home in Gautier which bordered a bayou and woods. He was happy and content sitting outside in the swing in the cool shade listening to birds singing and looking out across the marsh and water of the bayou. Nature was part of his life and he enjoyed it to the fullest. He was a member of East Moss Point Baptist Church and he loved God. He also loved people and has received his eternal reward from his father in heaven. He was preceded in death by one son, Charles Hammons and both his parents, Thomas and Virgie Mae Hammons, one brother, Herbert Hammons, and one sister, Ida Ruth Luthi. He is survived by his loving caring and devoted wife, Dorothy Hammons, of 66 years; two sons; Aubrey Hammons and wife, Jennifer of Spanish Fort, AL; Steve Hammons and wife, Dr. Lisa of Vancleave, MS; and one daughter, Cindy Hammons Mitchell Millette and husband, Bernard of Whitehouse, TX. Seven grandchildren, Jason Mitchell and wife, Amber of Germany; Jaime Hammons Kozuma and husband, Carl of Hawaii; Kim Mitchell VanSickel of Whitehouse, TX, Jared Hammons and wife, Christina of Spanish Fort, AL; Robert “Bobby” Dewberry of Mobile, AL; Mark Dewberry and wife, Dr. Dasha of Tampa, FL and Matt Dewberry of Vancleave, MS. Ten great-grandchildren; Carmen and Abigail VanSickel of Whitehouse, TX; Skylar and Brannen Mitchell of Germany; Aubriana, Cameron, Olivia and Ryland Kozuma of Hawaii, Michael Jones of Spanish Fort, AL and Charlie Dewberry of Mobile, AL. Two sisters, Martha Wesson and husband, Lee of Maryland and Sarah Colville of Minnesota; and one brother, David Hammons and wife, Lorna of Utah; and one brother-in-law, Lauren Rogers of McComb, MS; and one sister-in-law, Merle Clark of Florida along with numerous nieces, nephews, other relatives and friends. He was a kind, loving, devoted and hardworking husband, father, grandfather and great-grandfather. He was always a good provider for his family. He liked to help people anytime and in any way he could. A link of the family circle has been broken until we all meet again and join the link together again with our heavenly father. Until then family, relatives, and friends will cherish his loving memories. He will be sadly missed by his loving family. Visitation will be on Friday September 13, 2019 from 11am – 1pm at Holder Wells Funeral Home located at 4007 Main Street, Moss Point, MS 39563 (228-475-2112). Funeral services will be immediately following visitation at 1pm in Holder Wells Funeral Home Chapel. Burial will be in Serene Memorial Gardens, 12800 on Highway 613, Moss Point (Escatawpa), Jackson County, MS 39562 (228-475-7705). Reverend Steve Cirlot will be officiating the service. Pallbearers are Jared Hammons, Bernard Millette, Bobby Dewberry, Matt Dewberry, Franklin Rogers and Jerry Rogers. Friends may sign on line register at www.holderwellsfuneralhome.com Arrangements by Holder Wells Funeral Home, Moss Point, MS (228-475-2112)

Thomas Lincoln Hammons age 83, a resident of Gautier, Mississippi passed from his earthly home to his heavenly home on September 9, 2019 in We Care Hospice surrounded by family. He was born November 17, 1935, the first of six children to Thomas... View Obituary & Service Information

The family of Mr. Thomas Lincoln Hammons created this Life Tributes page to make it easy to share your memories.

Send flowers to the Hammons family.