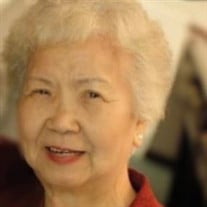 Toshiko Shumock Pigford, 94, of Wade, MS, passed away on April 1, 2021 in Marietta, GA. Toshiko was born in Gifu, Japan on September 27, 1929, although she would often say, “Japanese age is different!”, and that she was two years older. The United States agreed with her, and Toshiko’s legal birthdate is September 29, 1927. She graduated from one of the most prestigious universities in Japan with a major in English, highly unusual in post-WWII Japan. Following graduation, she was a translator for the U.S. Army in Yokohama, Japan, where she met and married John Bernie Shumock, against her family’s wishes and plans. Later, gladly, Toshiko and ”Bernie” were both welcomed into the Tsukasaki family. In December 1951, following the birth of Mary their first daughter, Toshiko, Bernie, and Mary left Japan. They traveled to the United States and, then, to Bernie’s family in Mobile, AL. Within a few years, two sons John and Michael were born. Toshiko and Bernie bought a house in Wade, and a second daughter Kathy completed their family. Toshiko taught at East Central Elementary School for many years and was a devoted, active-in-everything, and beloved member of Wade Baptist Church, singing in the famed “Granny Trio” with good friends Bernice Pittman and Belle Kirkwood (“famed” at Wade Baptist, that is). After Bernie’s death in late 1975, Toshiko married William “Bill” Hardin Pigford, a teacher at East Central High School, newly arrived from a teaching career in Arkansas. Bill’s three sons and two daughters from a previous marriage became her own. From then until the end of her days, Toshiko proudly told everyone that she was the mother of four daughters and five sons. After early retirement from the East Central School System, Toshiko and Bill spent many fulfilling and joyful years as Southern Baptist missionary teachers in the jungles of Belize in Central America, at Yantai University in the extreme north coast of China near Siberia, and lastly in Toshiko’s native country, in the city of Tokyo, Japan. A long-prayed-for gift was realized there when Toshiko’s sister came to know Jesus for herself. Following their mission work abroad, Toshiko and Bill returned home to Wade. Toshiko taught English-As-A-Second-Language classes, as well as Bible studies in the Gulf Coast women’s prison. Both Toshiko and Bill were active Gideons, and Toshiko was active in the Gideon’s statewide Women’s Auxiliary, as well. They volunteered regularly and often at the Seaman’s Center in Pascagoula, MS and were faithful volunteers and supporters of Wade Baptist Church, everywhere their gifts and age permitted. They both remained staunch prayer warriors after Toshiko’s stroke in 2012 until Bill’s death in 2015, at which time Toshiko continued that work. Toshiko is survived by four sons and four daughters. Mary Shumock Slider (Alborne Lonnie); Rev. Michael Kane Shumock (Suzanne Nobles); Kathy Shumock Johnson (Troy); Max Pigford; Lynn Pigford (Patsy); Rhonda Pigford Sullivan (Ron); Terrill Pigford Marler (Wade); and Rev. Tracy Pigford (Talitha). She is preceded in death by one son, John Forrest Shumock. She is also survived by 13 Shumock and seven Pigford grandchildren, 20 great-grandchildren (and counting), many beloved nieces, nephews, and cousins in the United States and Japan, and countless, dear friends around the globe. Toshiko’s family wishes to thank Zdell Ball for her years of loving care for Toshiko. Zdell’s care and God’s grace gave Toshiko many happy days (and even a few unexpected adventures) with daughter Mary, her husband Alborne and family in Marietta, GA. Zdell became part of our family. The family is also grateful to The Reverend Father Ben Day and Toshiko’s church family, Christ Episcopal Kennesaw, for their love and many acts of kindness throughout the last years of Toshiko’s life. Holder-Wells Funeral Home, Moss Point, MS, has had principal charge of Toshiko’s final arrangements in collaboration with The Ingram Funeral Home, Cumming, GA. The family is grateful to both funeral homes for their excellent service, compassion, and kindness. Visitation will be held Tuesday, April 6th from 1:00 pm to 2:00 pm at Wade Baptist Church, 20623 Highway 63, Moss Point, MS 30562. A service to celebrate Toshiko’s life will begin at 2:00pm in the sanctuary. The Reverend Michael Kane Shumock will be officiating. Burial will follow at Mt. Zion Primitive Baptist Family Cemetery, 9320 Cottage Hill Road, Mobile, AL 36695. At the family’s request, in lieu of flowers, memorial donations can be made in Toshiko Pigford’s honor. Please make checks payble to First Baptist Tillman’s Corner, notate IMB-Lottie Moon/Toshiko Pigford on the check, and mail to: First Baptist Tillman’s Corner, 5660 Three Notch Road, Mobile, AL 36616. Please also include a return address for receipt of tax-exempt donation. You may sign the online register book and send condolences to the family at www.holderwellsfuneral.com Holder-Wells Funeral Home 4007 Main Street Moss Point, Mississippi 39563 is in charge of the arrangements.

The family of Mrs. Toshiko Shumock Pigford created this Life Tributes page to make it easy to share your memories.

Toshiko Shumock Pigford, 94, of Wade, MS, passed away on April...

Send flowers to the Pigford family.