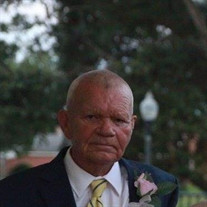 Mr. Wayne Edward Parker 79, of the Wade, MS passed away on May 30,2019 at his home surrounded by his family. Mr. Parker was born in Pascagoula MS on August 31, 1939.He was a member of Caswell Springs United Methodist Church in Wade, MS, he was a member of the East Central Masonic Lodge # 631 and the Order of the Eastern Star Chapter #393. He was retired from Ingalls Shipbuilding and after his retirement he worked at Full Circle Fitness for 16 years. He was very involved in Little League Baseball and Softball in Hurley and Wade. He served his country with pride and dedication with the United States Air Force and Air National Guard. He was preceded in death by one child, and his father Burch Parker, his mother Della Mae Roper and stepfather Edgar Roper. He is survived by his wife for 55 years Janell Parker, his son Kenneth (Kim) Parker, daughter Dinah (Joel) McCarra all of Wade,his son Kevin (Celita) Raines of Rocky Creek, and his sister Nelda Miles of Wade. He will also be sadly missed by his grandchildren Kristen (Adam) Pellerand of Woolmarket, Riley Parker, Noah Parker,Colt (Whitney) McCarra, Courtney McCarra all of Wade, Clayton (Amanda) Eppes of D’Iberville, and Kayla (Justin) Parker of Hurley. His great grandchildren Rosaleigh, Tinley, Kinsley, Adalyn, and Landen. He is also survived by his brothers-in-law, sisters-in-law and a host nieces, nephews and other relatives. Visitation will be Monday June 3,2019 from 10:00 am to 11:30 am at Caswell Springs United Methodist Church. The funeral will begin at 11:30 am from the church sanctuary with Rev. Kevin Bradley officiating. Burial will follow in Caswell Springs cemetery with Military Graveside Rites conducted by the American Legion Post #160 and Masonic Graveside Rites being conducted by the East Central Lodge #631. Pallbearers will be Riley Parker, Noah Parker, Colt McCarra, Clayton Eppes, Kevin Raines, and W.H.Goff. The family would express their thanks and gratitude to the Singing River Hospice of Light for the kindness and support during Mr. Parkers illness. You may sign the online register book and send condolences to the Parker family at www.holderwellsfuneralhome.com Holder-Wells Funeral Home at 4007 Main Street Moss Point, MS is in charge of the arrangements.

Mr. Wayne Edward Parker 79, of the Wade, MS passed away on May 30,2019 at his home surrounded by his family. Mr. Parker was born in Pascagoula MS on August 31, 1939.He was a member of Caswell Springs United Methodist Church in Wade, MS, he was... View Obituary & Service Information

The family of Mr. Wayne Edward Parker created this Life Tributes page to make it easy to share your memories.

Send flowers to the Parker family.