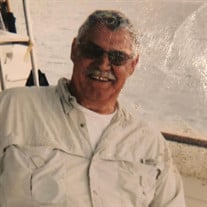 Wiley Joe Gibson, 77, of Pascagoula, MS, was surrounded by family and loved ones on the evening of July 15, 2019 when he passed away peacefully at home. Wiley Gibson was born June 15, 1942 in Lucedale, MS. Wiley graduated from Pascagoula High School, Class of 1961. He then proceeded to attend Perk Junior College with an automotive degree. Although he was in the National Guard for six years, it was Wiley's passion for electric motors that ultimately led him to start his own company: Gibson Electric Motor Sales & Service. He went from working on smaller motors at home to building the business, along with selling and repairing Industrial Electric motors. He was an active member in EASA, IBEW, Moose Lodge, Pascagoula Elks, and YMBC of Moss Point. GEM was Wiley's life passion, but it was one that he shared with his loving wife and forever date, Sandra Gibson. Wiley was an avid fisherman and loved fishing along the Pascagoula River, as well as spending time in Port Sulfur, LA, at a fishing camp he shared with his life-long buddies. Fishing and go-cart and drag racing are hobbies that Wiley loved and eventually shared with his sons, Darren, Ricky, and Mack. He also flew ultra-light planes. Piloting his airplanes became another passion that he shared with his family, especially his grandchildren. Wiley chose every available opportunity to show his grandchildren the world through his eyes. Wiley and Sandra Gibson, with their thirty-six years of adventuring around the globe, created a life and a love of their very own. Wiley was a businessman. He was a respectable man. Most importantly, he was a family man. Wiley was preceded in death by his parents, Shellie and Gertie Gibson; brother, Cecil (Gloria) Gibson; sister, Daphne Kitchens; son, Mack Reeves and grandson; Jeremy Floore. He is survived by his soul-mate of thirty-six years: Sandra Rogers Gibson, Moss Point, MS and faithful companion, Smoky Joe. Children: Rickey (Lora) Gibson, Pascagoula, MS; Jana (Harold) Floore, Moss Point, MS; Belinda (Rocky) Green, Pascagoula, MS; and Darren (Liz) Gibson of Hurley, MS. Grandchildren: Emily Reeves, Abby Floore, Taylor Reeves, Chestinie Gibson, Kaylin Gibson, Phoenix Green, Jacob Cauley, Jason Floore, and Jason Martin. Brother: Bobby Gibson and Brother-In-Law, Junior Kitchens, niece; Cassinda(Ken) Terry. Special extended family: Jim Davis, the Lightseys, the Krebs Family, Maureen Gibson, Katie Guessford, Mike Scott, Eunice Hutchinson, and Rodney Rogers. The family will like to extend a special thanks to the Hospice of Light at Dr. Bob Burns for their care and compassion during Wiley’s illness. Visitation will be Sunday July 21,2019 from 1:00 pm to 3:00 pm at Holder-Wells Funeral Home at 4007 Main Street Moss Point, MS. The funeral service will begin at 3:00 pm from the funeral home chapel with Reverend Jason Mendoza officiating. Burial will follow at Gibson cemetery in George county. Serving as pallbearers are; Mike Scott, Steven Krebs, Hyler Krebs, Buddy Baskin, Eric Gunther, and Willie Williams. Honorary pallbearers will be; John Roy, Billy Pope, Chad Crawford, Artie Sholtes, Paul Smith, and Jason Couch. You may sign the online register book and send condolences to the Gibson family at www.holderwellsfuneralhome.com Holder-Wells Funeral Home in Moss Point, MS is in charge of the arrangements.

Wiley Joe Gibson, 77, of Pascagoula, MS, was surrounded by family and loved ones on the evening of July 15, 2019 when he passed away peacefully at home. Wiley Gibson was born June 15, 1942 in Lucedale, MS. Wiley graduated from Pascagoula High... View Obituary & Service Information

The family of Mr Wiley Joe Gibson created this Life Tributes page to make it easy to share your memories.

Wiley Joe Gibson, 77, of Pascagoula, MS, was surrounded by family...

Send flowers to the Gibson family.