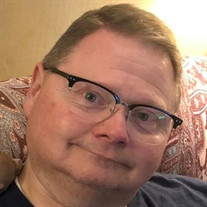 William "Buff" Dunnam, age 55, of Pascagoula, passed away on Friday, January 31, 2020. He was born on March 3, 1964 in Jackson, MS, to William Lawrence and Elizabeth Ann Smith Dunnam. On December 29, 1998, he married Anna Maria Sylvester in Gatlinburg, TN. Buff was a 911 dispatcher for the Pascagoula Police Department for 14 years. He then started a career with the City of Pascagoula, as a Building Official, where he has been for the past 18 years. Buff was a longtime member of the Gulf Regional Planning Commission. He was an avid Nascar fan, and was a known "grillmaster". Buff never met a stranger, and anywhere he walked into he was greeted by people that he has helped throughout the years. He had the ability to finesse. Indeed no one could be mad at that face, smile, and heart. Buff is survived by his wife 21 years, Anna Dunnam of Pascagoula; his fur babies, Roxy, Dotty, Clara Belle, and Pebbles; sister, Patti Lundy (Fred) of Pascagoula; brother, Roger Dunnam of Gautier; brother in law, Terry Strickland; nieces, Charmin Degner and her daughter, Marie, and niece Laura Crowe; nephews, Bo Crowe (Courtney) and Jason "Bull" Dunnam (Kristi); a special friend and neighbor, Bill Moore; numerous great nieces and nephews, and a host of friends and coworkers that will miss him dearly. He was preceded in death by his parents, and sister, Candice Strickland. A Celebration of Life will be held on Wednesday, February 5, at 6:30 PM, with the family to receive friends starting at 5:00 PM, at Holder-Wells Funeral Home, 4007 Main Street, Moss Point. In lieu of flowers the family requests that memorials be made in his name to the American Heart Association, and/or Jackson County Animal Shelter in Gautier.

William "Buff" Dunnam, age 55, of Pascagoula, passed away on Friday, January 31, 2020. He was born on March 3, 1964 in Jackson, MS, to William Lawrence and Elizabeth Ann Smith Dunnam. On December 29, 1998, he married Anna Maria Sylvester in... View Obituary & Service Information

The family of William "Buff" Dunnam created this Life Tributes page to make it easy to share your memories.

William &quot;Buff&quot; Dunnam, age 55, of Pascagoula, passed away on...

Send flowers to the Dunnam family.