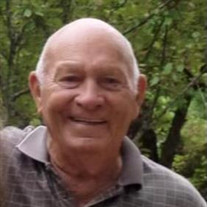 William Edward Fulton passed away quietly on August 14, 2021. He lived a full and abundant life here on earth, but has now gone to be with our Lord, Jesus Christ. He was 91 years of age. William Edward Fulton was born on February 7, 1930 to Alise and Oliver Fulton of Moss Point, Mississippi. He graduated from Moss Point High School in 1949. He had a love for playing baseball, and later coached youth baseball in Jackson County for many years. He served in the US Army and was stationed abroad during the Korean War. After returning, he worked for International Paper Company at the Moss Point Mill where he retired after 41 years of service. He was also one of the original founding fathers of Live Oak Academy in Moss Point. Most people knew him as Billy Fulton, but to his family and those who looked up to him called him Daddy Bill. He is preceded in death by his parents and his sisters, Bobbie Fulton Fullilove and Carolyn Fulton Smith. He is survived by his wife Elsie Fulton, his three daughters Leann Fulton, Renee Fulton Cumbie (Mike), and Susan Fulton Moeller (Jimmy),his son/grandson William Brian Fulton and his stepdaughter Paula (Gerald) Simpson.He is also survived by his grandchildren Amanda Sonnier (Jody), Jessica Creel (Eric), Samantha Gallien (Alex), Lori Bailey (Mitch), Lindsey Lofton, Lacey Lofton, Beth Reeves, Kellie Brooks (Dallas),Jenna Fulton, Monique Cooper, John Simpson, and Anthony Simpson, along with 13 great grandchildren and so many others that loved him. Billy Fulton will be forever remembered for his faith, his love for his family and friends, and his desire to help others. He loved to help people with odd jobs, and spent countless hours wiring houses, working on appliances, and whatever anyone needed help with, with nothing expected in return. He loved living on his farm in George County for the past 30 years and was especially grateful when his grandchildren would spend time with him tending to animals, picking fruits and vegetables out of his garden, or just riding around with him on the golf cart. Everyone loved to hear him tell stories about the good ole days and how much he loved baseball, because they knew there was a lesson to be learned. Most of all he will be remembered for his faith, and always leading the prayer during family gatherings. He was very generous with his time, and he treated everyone with love in his heart. He will be missed. Graveside services will be held on Saturday , August 21, 2021, at 10 AM, at Cook Family Cemetery in Agricola, Mississippi. You may view the online register book and send condolences to the family at www.holderwellsfuneralhom. com Holder-Wells Funeral Home 4007 Main Street Moss Point, Mississippi 39563 is in charge of the arrangements.

William Edward Fulton passed away quietly on August 14, 2021. He lived a full and abundant life here on earth, but has now gone to be with our Lord, Jesus Christ. He was 91 years of age. William Edward Fulton was born on February 7, 1930 to... View Obituary & Service Information

The family of Mr. William Edward "Billy" Fulton created this Life Tributes page to make it easy to share your memories.

Send flowers to the Fulton family.